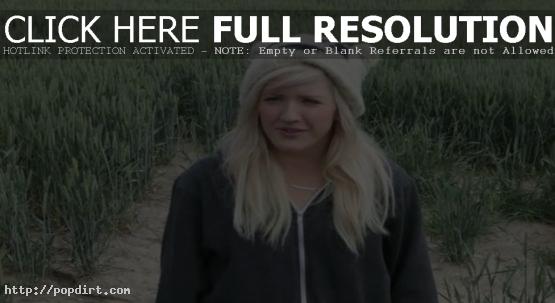 On touring with Perry, Goulding explained, “I had known she’d been a fan for a long time. She tweeted about me years ago, ‘Under The Sheets’ she tweeted about, and I guess she’s always been a fan and actually my friend Jessie J had a really bad foot so she couldn’t do it, so I filled in for her basically.”

Asked about her chance to perform at the White House, Ellie confessed, “I don’t know how that happened, but I think they needed a singer and I was available. I think they wanted me to sing and they had heard me.”

Describing her new album as a “breakup record”, Ellie said, “I hate the thought of people not knowing everything. I don’t want there to be any grey areas about what I do, so I like to be honest. I think it’s important.”

Discussing the album’s single ‘Anything Could Happen’, Ellie said that the track was “about freedom. It’s about fate and I suppose it’s self-explanatory really. Yeah, I’ll give you everything you need but I don’t need you is a statement of being free and not being held down by anything or anyone. I like that song.”

On the album being “all Ellie”, she said, “I think it should be. I didn’t want to come back with an album and have it just be all collaborations, but I think collaborating is one of the most important things an artist can do at the same time, so I have done collaborations, just not on my record. I felt like I owed it to my fans to just give them me seeing that it’s been so long.”

The interview at Soundcloud has since been removed.