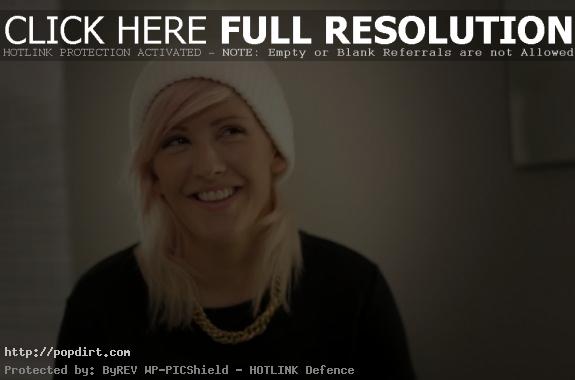 Ellie Goulding recently caught up with Nessa of WiLD 94.9 in San Francisco, where the British singer songwriter talked about how she got so into running, removing her eyebrows for the ‘Anything Could Happen’ music video, how she’d describe her music to the uninformed, making time to be with her (now ex) boyfriend Skrillex, and touring with Katy Perry.

Asked how she got into running, Ellie said, “Kind of like Forrest Gump. I just started running once when I was 18, I decided I wanted to start running and I went out and that was it. There was no going back, and I’ve been running ever since then. Weird.”

Talking about the music video for ‘Anything Could Happen’, Goulding said, “People keep talking about the fact that I have no eyebrows in it. It’s like, ‘Why is that such a big deal?’ I was on my Twitter this morning and it was like ten comments asking ‘Where did your eyebrows go?’ I kind of wanted to look kind of ghostly. It makes such a difference when you get rid of your eyebrows. When you’re pale and you have no eyebrows and blonde or pink hair or whatever, it looks crazy, it looks massively different.”

Describing herself to those that don’t know her, Ellie said, “I make pop music. I’ve always made pop music. My last album was more electronic. I play guitar a lot so there’s a lot of guitar on it. I like messing around my vocals. My set is kind of like a DJ set in that I like the songs intertwined with each other, then myself and the band essentially remix my own songs. Then there’s loads of drums. It’s very tribal and very epic. We all are really, really fascinated by electronic music like EDM, even folk music and classical music and all kinds of things. So my voice leads it all, my voice is the leader and everything else kind of follows. The next record ‘Halcyon’ my voice is way more present and I think that people will go away listening to the album thinking of my voice more than anything.”

Questioned why she has no features on the album, Ellie said, “Probably for the same reason you’re respecting me for. I didn’t want any. I want to collaborate with so many people, but this record had to be a document of me and entirely me. I felt like I owed that to people. It’s been such a long time. I don’t want to just cover it with collaborations. I want it to be all me.”

Asked how she makes it work with Skrillex with their busy schedules, Ellie said, “We just have to make it work and cross paths. It’s all about crossing paths. It’s hard but you just make it happen.”

Asked if she and Skrillex are ever critical of each other’s music, Ellie responded, “I know this sounds like I’m not being truthful, but generally everything he plays for me I love. I’m very critical. I have constructive criticism for anyone who wants it, but I genuinely haven’t been able to find a fault.”

Asked about what it was like touring with Katy Perry, Ellie said, “She’s so much fun. She’s so cool. She kind of simultaneously takes nothing seriously but everything seriously. Her shows are so amazingly well done but at the same time she has so much fun and she doesn’t take anything seriously, so she’s got the perfect makeup to be what she is. She can do everything pretty well.”