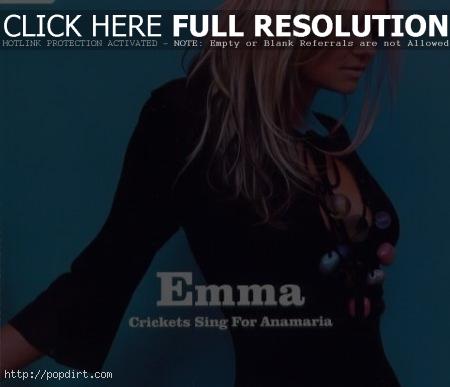 Former Spice Girl Emma Bunton posted a message to fans on her official website on June 8th, after her new single ‘Crickets Sing For Annamaria’ entered the UK singles charts at #15. Emma wrote, “It’s always tricky knowing how a track will do when you’ve already released quite a few off the same album so I’m really chuffed to bits to have done so well. Ever since we decided to run with ‘Crickets’ as a single, the feedback from everyone’s been brilliant and the whole project – from filming the video to learning the dance routines to performing it for TV – has been an absolute ball.”

May 30, 2004 – Former Spice Girl Emma Bunton was the guest editor for The Sunday Mirror, explaining why she’s back with former boyfriend and former Damage singer Jade Jones. Bunton said, “It’s really hard because I don’t want to say this is happening or this isn’t happening. I’m just seeing how things are going. But despite all the reports of our on-off romance over the years, Jade and I have only actually ever broken up once. And at the end of the day, we are such good friends and we were a big part of each other’s lives. We’re just kinda figuring things out for ourselves at the moment, and like anyone else we don’t want to say much more.”

Emma Bunton Back In The Swing

May 20, 2004 – Former Spice Girl Emma Bunton posted a new message on her official website Friday (May 14). She writes, “Hi everybody, hope you’re all really well and loving the sunshine – summer’s here at last! Well, after a fabulous three weeks off at the end of March, I’m now back in the swing with lots of interviews and performances for ‘Crickets Sing’ – so, as usual, it’s been mad but brilliant. Hope you’re loving the new single – it’s so different isn’t it? And just you wait till you hear the other Brazilian sounding tracks I’ve recorded. So exciting!”

April 8, 2004 – According to the latest Popbitch newsletter, former Spice Girl Emma Bunton was recently sitting in a London bar having a drink when approached by a group of fans holding up a camera. “Sorry Emma…would you mind?” they asked. “Not at all”, Emma replied, getting up graciously to pose for photos. Instead the “fans” cruelly handed her the camera and posed for the photo they wanted Bunton to take just of them.