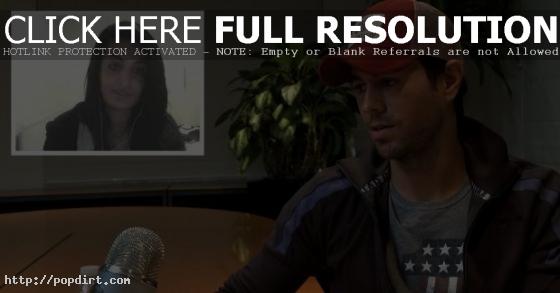 Enrique Iglesias did an Ask:Reply session with several of his fans on VEVO, including one with Abeera from London. She asked the pop singer about advice he has been given, which led to his entertainment background with his father Julio, and his desire to fly and be like Superman.

On the best advice he’s been given, Enrique said, “It wasn’t so much advice. I wouldn’t be able to pick one single thing. It would be more like the way I grew up, so close in the industry, and being able to learn a lot. You learn mainly about people and to surround yourself with good people. People that tell you the truth. It’s so easy when you do what I do to be surrounded by people that just kiss your butt all the time. That’s how you lose touch with reality.”

Asked if he could have any supernatural power, Enrique quickly responded, “To fly. Undoubtedly fly. I wish I could fly. I always wanted to be Superman when I was a kid. Sometimes I even wear my underwear on the outside. My favorite superhero was Superman and a lot of times what I would catch myself doing, especially when I would get drunk, I’ll put on my pants and slip my underwear on after and I feel like Superman. That’s too much info, sorry.”