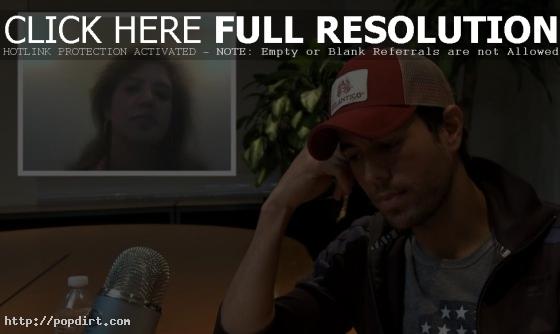 Enrique Iglesias did an ASK:REPLY session with several fans for VEVO via video chat, including with Lilli, who asked the 37-year-old about whether he ever deals with writer’s block or if he has thought about producing albums for other artists.

Asked about how he deals with writer’s block, the pop star responded, “Look, I compare songwriting a little bit to, it might be a stupid comparison, if you fish you would know this. If you fish and you write songs, it’s like going fishing, you never know when you’re gonna catch a bit one. It can be nerve-wracking. You can be out in the studio for days and for months and it’s not so much writer’s block, but being able to write something that you feel good about, or that you feel is worth it, so a lot of times for me that’s what happens. I’ll always write songs, constantly, but it’s about writing songs you feel confident that you can go out there and you’ll be able to promote them and not get bored easily, that for me is the most important thing right now. When I say that, a lot of people don’t realize once you make a song you’re going to have to sing it thousands of times. You have to be sure you feel good about it.”

As for whether he would produce albums for other artists, Enrique responded, “I thought about that in the past, but it’s tough. I go nuts when I make my own albums, so I don’t know if I can handle my albums and this might sound greedy, but it has nothing to do with that, I just don’t.. I would lay back a little bit, and just concentrate on that artist I decide to produce.”