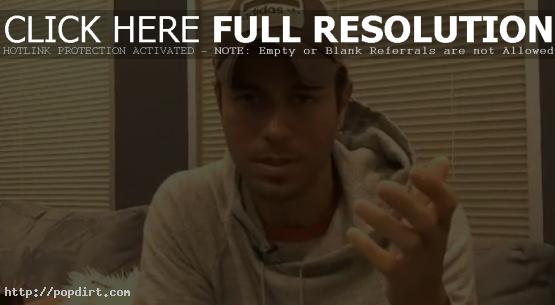 Enrique Iglesias answered some fan questions with a video clip on his YouTube channel, revealing he’s been in the studio lately writing songs in Spanish and English hoping to release two albums at the same time. Enrique is also looking forward to touring in Europe and Mexico, and spots he hasn’t been to in a long time like Australia and India. Enrique says he goes on YouTube a lot to watch videos since you can’t see them on television anymore.

“I love to tour and hopefully I want to visit other places I haven’t been to in a long time,” Enrique said. “I want to go to Australia, India. After that, I’m gonna go back in the studio, and I’m truly just in the beginning of a project of making these two albums, so hopefully I’m gonna get some time off to concentrate on songwriting.”

As for working with Ciara on ‘Takin’ Back My Love’, Enrique said, “It was a great process. She was easy to work with. She’s fun. She knows what she wants. I feel like it’s one of the better videos I’ve done. The reason I say this is that it’s real and I think it happens to a lot of couples.”