Fame Exciting And Weird For The Jonas Brothers

Usmagazine.com caught up with the Jonas Brothers on Tuesday night at the Chevy Rocks the Future concert in Burbank, California. Asked about their ‘When You Look Me in the Eyes’ tour, coming off their prior tour with ‘Hannah Montana’ star Miley Cyrus, Kevin Jonas said, “It’s just us. We left the Hannah Montana tour. We did the movie, and the movie is doing fantastic. Totally excited.” As for how the sibling trio are adjusting to fame, Joe Jonas said, “It’s a crazy feeling when there are thousands of girls waiting in the other room. It’s weird, but it’s exciting for us.”

Jonas Brothers ‘Look Me In The Eyes’ Tour Makes History

The Jonas Brothers’ ‘Look Me In The Eyes’ Tour made history with the fastest sellout ever at the Gibson Amphitheatre in Los Angeles. All the shows that went on sale last weekend sold out, and tickets to thirteen more cities go on sale tomorrow.

A promo clip at YouTube has since been removed.

Kevin Jonas Talks About Tucson Show With Johnjay And Rich

Kevin Jonas of the Jonas Brothers was on the phone with Johnjay and Rich of 104.7 KISS FM in Phoenix on Monday (January 14) to talk about their upcoming concert at the Tucson Convention Center Music Hall Theatre on January 31st, which sold out as did their other gigs across the west. Kevin said he was in Los Angeles where they were finishing up their record, which he said will be completed in three days and released July 8th. Kevin added the song they feel will be their first single they will be playing on the tour. He wasn’t sure about the chances of a second show in Tucson. As for the lottery system for the tickets, Kevin said the guys were forced to do it that way because ticket brokers were hiring homeless people to wait in line. 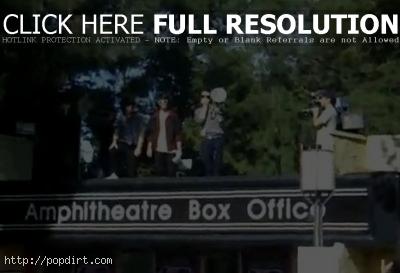 The Jonas Brothers made a surprise visit to see their fans buying tickets at The Gibson Amphitheatre at Universal Citywalk for their show February 2nd.

Using a bullhorn and standing above the Amphitheathre Box Office, Kevin Jonas told the screaming girls they were adding a second show on February 2nd – one at 4 PM and one at 8 PM.