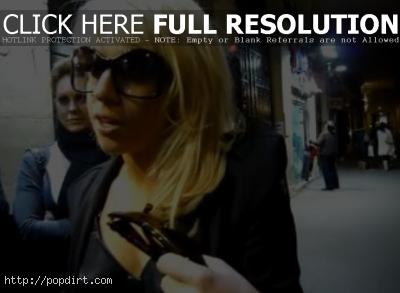 Lady Gaga’s vintage Versace sunglasses were stolen recently, and a fan outside the VIP Room in Paris, France on Wednesday night (February 25), where a fan presented the singer with a replacement pair. She had been desperate to get them back and said she’d make the person who returned them to her the star of her next video.

“The only downer was that my Versaces were stolen,” Lady Gaga said about her shows with the Pussycat Dolls. “I’m so devastated I can barely talk. If anyone knows where my Biggie Smalls Versace glasses are, I’ll make them the star of my next video!”

She asked if he wanted her to sign them, but apparently he was giving them to her, prompting her to ask to get his information to perhaps have him in her new music video.