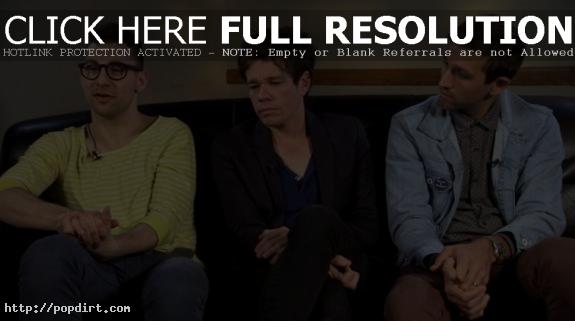 Nate Ruess, Jack Antonoff and Andrew Dost of fun. sat down to talk about getting multiple Grammy nominations, with the trio taking home two Grammys for Best New Artist and Song of the Year (‘We Are Young’), at last month’s awards show in Los Angeles.

“My initial thought was just kind of shocked. Went a little numb I guess,” Andrew explained. “We were just kind of stunned and ultimately just very, very honored.”

Jack added, “My sister was filming my family and my best friend back in New York all on the couch. She was filming them watching. So I got this video when we got backstage and it was everyone sitting watching the screen and exploding and yelling and screaming. It was like a scene in a movie.”

On the award, Andrew said, “It’s a huge honor to be recognized by the Grammy committee, because it’s not based on any one genre in particular even.”

Jack said about the nomination, “Being nominated is always a thought the way you would dream about going to the moon or being a rocket scientist or a brain surgeon or anything like that, because it’s the ultimate honor for our field.”

Video of the comments at VEVO have since been removed.