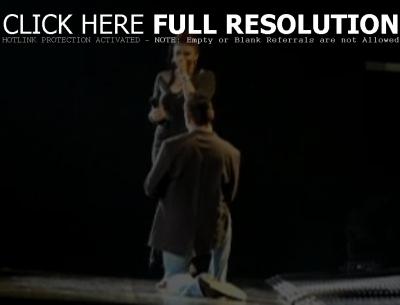 ‘American Idol’ season six finalist Gina Glocksen received a marriage proposal from longtime beau Joe Ruzicka on stage during the ‘Idols Live’ tour stop on Tuesday (August 7) during her hometown gig at the Allstate Arena in Rosemont, Illinois. Glocksen had just finished a duet with Phil Stacey on Tim McGraw and Faith Hill’s ‘It’s Your Love’ when Ruzicka was ushered onstage.

Watch what happened next below.

June 28, 2007 – The top ten contestants on the sixth season of ‘American Idol’ are gearing up for 56-city tour. Jordin Sparks, Blake Lewis, Melinda Doolittle, Chris Sligh, Sanjaya Malakar and more spoke about the tour with Adam Housley of Fox News. Video at FoxNews.com has since been removed.

June 11, 2007 – The Toronto Globe and Mail caught up with ‘American Idol’ host Ryan Seacrest, who addressed the issue of the falling ratings on the sixth season of ‘Idol’ compared to the previous year. “Well, the knee-jerk reaction would be Simon [Cowell],” Seacrest joked. “Clearly there’s an oversaturation of his character. It’s still 30 million-plus viewers [in the U.S.] … which we’re very happy with.” As for whether the show may make some changes with the judges to reverse the trend, Ryan responded, “That’s clearly rumor. I’m positive you can’t recreate the chemistry that we have with the group on ‘American Idol’.”

May 26, 2007 – Conan O’Brien joked during his Late Night monologue on Wednesday night, “Well, tonight, of course, was the season finale of ‘American Idol’. Since we tape just a little bit early, we don’t know who won. However, we do know that tomorrow, Paula Abdul won’t remember any of it.”

«Drake Bell Talks With We Call This Music Fab
Woman Whose Car Got Hit By Britney Speaks Out, Files Police Report»