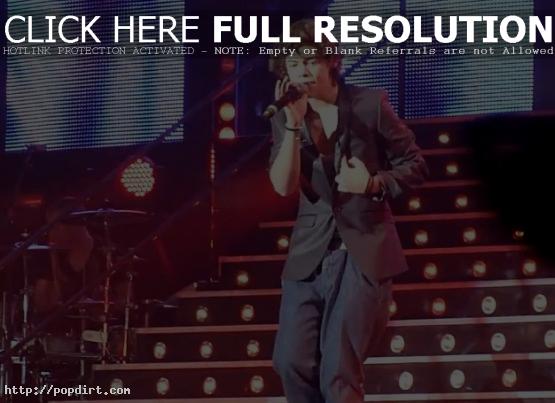 Harry Styles from One Direction was on the phone with C95’s Matty B. in Saskatoon. The boyband member talked about the how the tour was going, how their ears hold up with all the screaming girls, their rapid success, why girls might like them, having millions of Twitter followers, how much he appreciates the group’s stylist Caroline Watson, and getting alone time.

I think it’s just gone so quick, you know? Everything moved so quick. The support from the fans, in the UK, all around Europe, and in America and in Canada has just been unbelievable. It’s been so, so good. So supportive. It’s hard to believe places we haven’t been yet have given us support. We’ve been to Sweden a couple of times to record and we have a #1 album in Sweden, so it’s been really crazy.

I think the reason why people might come to like us is the fact that we’re quite relatable to teenage girls. We’re the kind of boys that you go to school with where we’re not from stage school. We haven’t been brought up to be in a band or live this life. It just happened we were given this massive opportunity. We’re all so grateful for it. We’re not the typical clean cut pop stars. We’re a little bit rougher. We’re the boys if a bra gets thrown on stage we pick it up and make a joke out of it.

I think it adds pressure. Every time you go to Tweet, you have to think a lot of people are gonna see this. I did Tweet a while ago that I really fancy a donut and I did get a few actually.

On how the stylist makes them look so good in their music videos:

We have a lady called Caroline Watson who is really good at getting us and she she works a lot with us. She doesn’t go off and just go, ‘You’re gonna wear this.’ It’s a lot of conversation about what we feel comfortable in, things we want to wear. Obviously people’s style changes all of the time and she’s very good at accommodating that. If you don’t like something as much anymore and you might want to start doing something else, she’s really up for changing it.

On if he gets any alone time:

Yeah you do. Actually being on tour. When we’re not on tour and working in the city and stuff, and we’re in a really small car everyday. So being on tour, we’re in a big tour bus so we actually get more time to ourselves, so it’s all good. We get on very well. You’d think that after four days working with each other you’d want to be on your own, but we still choose to stay together.