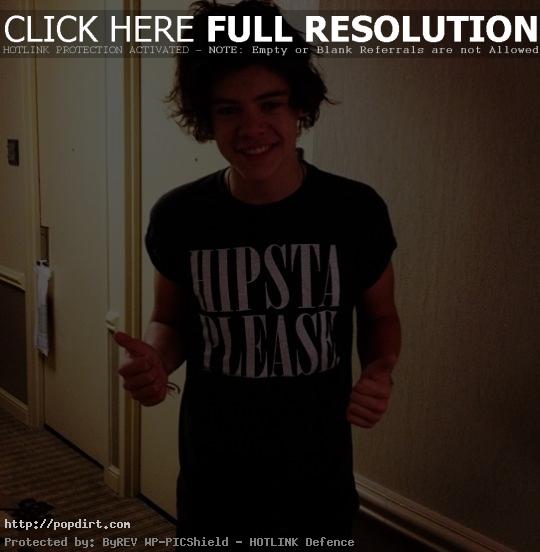 Harry Styles of One Direction recently spoke with Virgin Radio, where the British boyband member talked about how things have blow up for them, their amazing fans, trying not to think they’ve “made it”, keeping in touch with family on the road, what their typical day is like, the hair and using Twitter more than Facebook.

On being shocked about how quickly things have gone:

Yeah, I think for us we’re just five normal teenage lads who have been having a lot of fun working hard and it seems to have blown up, so we’re very lucky boys.

On whether they get overwhelmed by the fans adulation:

Yeah the fans have been absolutely amazing, I think we definitely have the best fans in the world. They put in so much work and so much time for us. They’re the ones who kind of wake up and stay out in the cold and stuff and I think they’re just incredible.

On whether they’ve had a “we’ve made it” moment:

I think it’s good where you don’t have a moment where you think I’ve made it, because I think it’s important that you keep changing up your goals to make sure you don’t kind of take your foot off the pedal. I think you have to keep making sure you’re always on top of your game. I think we did MuchMusic in Toronto and it was crazy for us, because obviously we’re not from there, so for us to be kind of away from home and have that kind of reaction was amazing. That was a nice experience.

On staying in touch with family while on the road:

Yeah, I think family is where you come from. Speaking to your family a lot keeps you who you are, and we’re very lucky to have great families who keep us grounded and very supportive and stuff. Touching base every time is never a bad thing.

On their typical days of late:

Our days are pretty much we get up, and we do some interviews and TV and stuff, and then we might have a performance, and at night we’ll fly. The last six days we’ve had a flight every night.

On whether it takes a long time to style his hair:

Not really, it’s kind of like out of bed and then dry it.

I’m not addicted. Sometimes I forget to go on it at all. I got rid of my Facebook for ages, and then I got it back and I posted and it was two months since my last thing. I just don’t really use it. Yeah, I try to get on Twitter a lot. I use Twitter a lot more than I do Facebook.