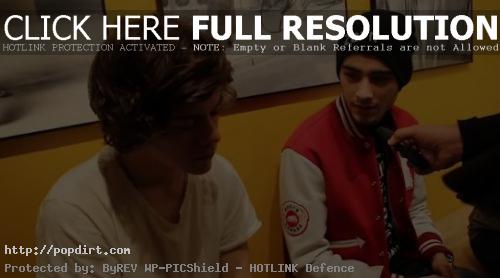 Mojo in the Morning of Channel 955 in Detroit went backstage with One Direction members Zayn Malik and Harry Styles recently, where the pair talked about Harry and older women, the craziest thing a fan has done, if they miss being able to walk the streets peacefully, if it was upsetting to not win ‘The X Factor’, Zayn’s relationship with Perrie Edwards, if anyone in the group “is hiding their homosexuality” and if they fight.

On Harry having a thing for older women:

Sometimes. Maybe it depends on the person.

On the craziest thing a fan has done around them, Zayn said:

When we were in Sweden, somebody hid in a bin (trash can) and tried to come in the back entrance of the studio while in a bin.

On whether they miss the days of being able to walk the streets peacefully, Harry said:

It is absolutely the greatest thing that ever happened. We can still do stuff, so we can’t complain. It’s amazing.

On if they were upset not to win ‘The X Factor’:

Zayn: No because we viewed the competition as an experience thing, so for us it was like go home as a solo artist or continue the experience as a group, so we decided to give it a go and here we are now.
Harry: I think that if we had won, we might not be here now, so I think coming in third was right for us and I wouldn’t want to change anything.

Zayn on the status of his relationship with Perrie Edwards of Little Mix and if he’s “taken”:

On whether they fight at all:

Harry: We have had brotherly squabbles over the TV channel, but no big arguments.
Zayn: They always seem to have a dig at me because I like to keep a window open, and they all cry because they like to be warm.

The interview audio at mojointhemorning.com has since been removed.