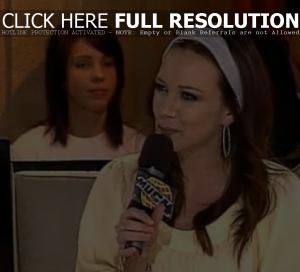 Hilary Duff visited MuchMusic Studios on Tuesday (April 24) at the Chum/City Building in Toronto, Ontario for an appearance on ‘Live@Much’. During an interview with Leah Miller, Duff talked about doubting the lyrics as she wrote them, not having an interest in directing, and the support she got on her new album ‘Dignity’ from Kara Dioguardi.

Asked if she ever doubted the lyrics when writing them down, Duff said, “Yes. There’s songs about, of course everyone talks about the breakup songs, because they think that’s the most interesting thing to talk about, but there’s also positive songs about being in a relationship on my record. There’s songs about myself and living in LA and the experiences that I have. There’s a song about me needing to work on myself. There’s a song about my interest in this older man. It’s all over the place, every feeling I had when making this record. It’s just weird that they want to point out the negative things first.”

On the best advice she got from Kara Dioguardi when writing her new album ‘Dignity’, Duff said, “She was a big supporter of keeping all the lyrics that I wrote, because I did go through a time where I really doubted what I had written. This is really honest, are people going to think I’m being mean? My real view on what I think and do I want people to know this about my family? You feel different and weird, but people relate to you. Kara was the one that said you have to push yourself. You have to not be afraid of what people have to say, and you wrote this and it came from you. You’ve gotta say it. It kind of empowered me to keep the lyrics. There’s not one song that I trashed. So all the songs that I wrote, they’re on there.”

Check out pictures from WireImage. Watch the interview below the fold.

«Jay Leno On Sheryl Crow’s One Square Suggestion
Mel B: Eddie Murphy Humiliated Himself, Not Me»