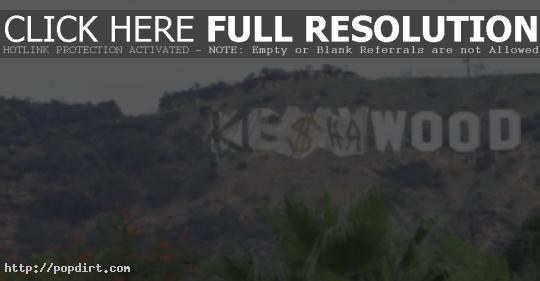 Kesha Sebert, aka Ke$ha, was joined by her posse in the Hollywood Hills, where the ‘Tik Tok’ singer defaced the landmark Hollywood sign. The girls were initially caught by police officers, but when the law enforcement left the scene, they climbed the fence or crawled under it to cover the “Holly” with bedsheets marked up with “Ke$ha”. After being chased off, Ke$ha was seen the next morning being woken up in a car to see that the sign was still covered with her name. Watch it go down below.

Update: It’s not the real Hollywood sign. “First of all, when they run off – that’s a 40 foot drop there,” Betsy Isroelit at the Hollywood Sign Trust explained to Entertainment Weekly. “There’s no way they could be running off in heels. It’s very dangerous up there. Secondly, the sign is made of corrugated steel. It has ridges. And you can see what they pretend to be the sign is a completely flat surface.”