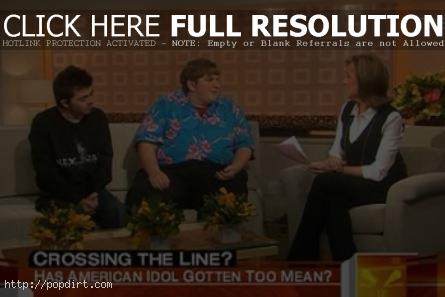 NBC’s John Larson reported on whether ‘American Idol’ judges are too cruel. Then, ‘Today’ host Meredith Vieira talked with rejected ‘Idol’ contestants Jonathan Jayne and Kenneth Swale about their auditions. Video of the segment, aired Monday (January 22), at Bing.com has since been removed.

January 20, 2007 – Conan O’Brien joked during his Late Night monologue on Friday night, “TV critics are upset at ‘American Idol’ for intentionally featuring bad singers, then having the judges ridicule them. Yeah. In response, Paula Abdul said, ‘I can’t help it. I’m a mean drunk’.”

January 20, 2007 – Jay Leno joked during his Tonight Show monologue on Friday night, “Saddam’s lawyer was speaking out again today. And he said he has never seen judges so cruel, cold and unsympathetic, and he was talking about ‘American Idol’. Oh, it’s unbelievable. Is ‘American Idol’ getting meaner? Do you think it’s getting meaner? [Audience says yes] It is meaner, isn’t it? I think they’re deliberately — here’s how out of control it is. You know who two of the guest judges are gonna be this year? Michael Richards and Isaiah Washington.”

January 20, 2007 – Dr. Phil spoke with ‘Entertainment Tonight’ about the rough auditions ‘American Idol’ contestants have been through as the sixth season kicked off earlier this week. The talk show advice guru pointed out that the wannabes who auditioned for this season’s series have been watching the show for five years, so they know the ‘Idol’ drill. “The people who go on there that can’t sing are looking for their 15 minutes,” he explained. “They love that. They know what they are getting before they get in there. If they went in there and thought that it was a warm, fuzzy experience, and they were going to have a soft place to fall with their talent, and they got ambushed, [that would be a] different story, but that is not the case.” 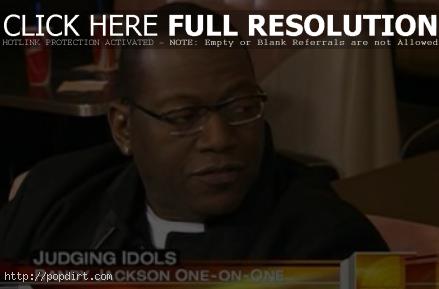 January 17, 2007 – ‘Today’ host Meredith Vieira recapped Tuesday night’s season premiere of ‘American Idol’, and talked with judge Randy Jackson about the competition. Video of the segment, aired Wednesday (January 17), at Bing.com has since been removed.

January 10, 2007 – With season six of ‘American Idol’ just one week away, ‘Extra’ correspondent Terri Seymour and Jerry Penacoli met up with Paula Abdul, Simon Cowell, and Randy Jackson to get a sneak peek of the new twists and the god-awful notes.