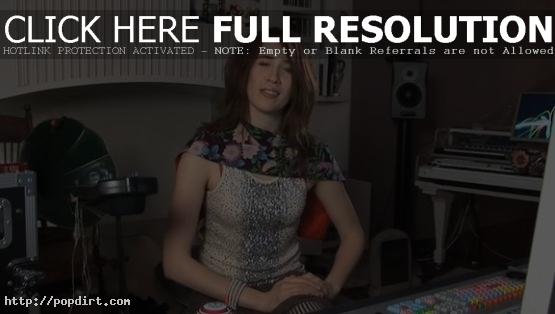 Imogen Heap checked in from her home studio with more news on her upcoming album. Heap talked about taking the piano out of ‘The Song That Never Was’, adding that it won’t be on the album because she specifically wrote it for a children’s animated movie called ‘Little Spirit’. She’ll also be participating in Twestival, the Twitter festival happening in London on February 12th. Heap played a bit of a new song she wrote called ‘Earth’, admitting to some struggles with the environmental song because she’s not too knowledgeable about the subject.

“I’m still not done. Sorry. You’ve waited this long. I know you’ll be okay. It is gonna come out. I assure you of that,” Heap said about the new album. “For the last few weeks, I’ve been working on a song that I played you right at the end of the last (blog). It’s still technically called ‘Earth’. So I wanted a bit of a rest. So I went and played ‘a-ha’. When I played ‘a-ha’ to some friends recently, I was playing it, and you know I said it was going to be a love/hate song. Well, it’s fine if I really love it all the time, but sometimes I actually hate it myself. Sometimes I play it to people and I’m like, you know I’m kind of sitting around uncomfortably in my chair and I’m not comfortable with this. I need to look at it again. So I did. I looked at it again and I’m really getting it now. I took out the piano, which was kind of the backbone of the song. I much prefer it because it breathes now and it fits so much better on the album.”

Watch the video blog below.