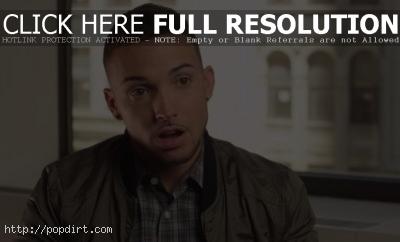 Pop R&B singer J Rand sat down and discussed his inspirations and his music in a new ‘Meet JRand: Episode 1’ video. In the clip, Joshua Randall opened up about what sparked his drive to be an entertainer, and also goes behind the scenes of recording and filming for his debut single, ‘Up Against the Wall’.

Born and raised in Delray, Florida, JRand is not only a talented singer and dancer, but also an actor who appeared in the Tom Cruise film Rock of Ages and the upcoming Spring Breakers starring James Franco. The Poe Boy Music Group / Geffen Records recording artist is set to release his debut album soon.

“J Rand comes from my birth name of Joshua Randall,” the Delray, Florida native explained. “For the sake of being cool, we’re shortening it to J Rand.”

As for his early inspiration to get into music, the artist said, “When I was a kid, I was just always fascinated with entertainers, Michael Jackson, I saw that guy dance and thought I want to do something like that when I grow up. I think it started out with me dancing around at my sister’s birthday parties. Performing and getting that attention, I like that feel, of feeling pressure and getting up in front of people and just performing and getting that nervous energy out. I developed a love for singing and then a love for writing. As a child, just playing around in my garage. It’s kind of funny, my mother always said you make a living now and you’re still playing around.”

Asked how he’d describe his music, J Rand responded, “I think it’s modern. I think it’s fresh. It’s pop, R&B. My life performance, I guess it’s expect the unexpected. Of course we’re gonna have choreography and dancing, but the element of surprise and element of living in the moment, you never know what’s gonna happen. That’s exciting about performing live.”