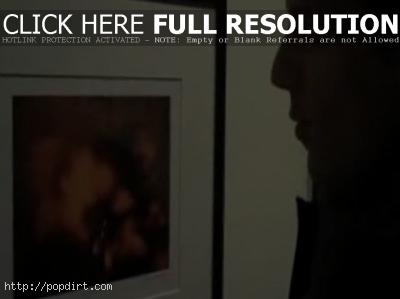 Jason Mraz posted footage from his Polaroid Art Show in New Yok City, featuring images from his book ‘A Thousand Things’. The singer songwriter focused on one picture he called “A Thousand Things”, a double exposure featuring two of his friends smiling separately and kissing which inspired his song of the same name and the book’s title.

“This truly is one of my favorite pictures,” Jason said pointing to the image seen above. “I actually used to have this original framed above my bed. Then when it came time to do the show, I pulled it down. Actually if you look in the book, you’ll notice there’s Scotch tape and different things on the actual scan of the picture because I had quotes on it and it was all taped up over my bed. I really wanted it in the book and I called this picture ‘1000 Things’. It’s a double exposure of my old friends, I’m not gonna call them their real names, of Dan and Theresa. Dan and Theresa are seen here smiling but in the double exposure you can also see Dan and Theresa kissing.”

One thought on “Jason Mraz Talks About ‘A Thousand Things’ Photo”