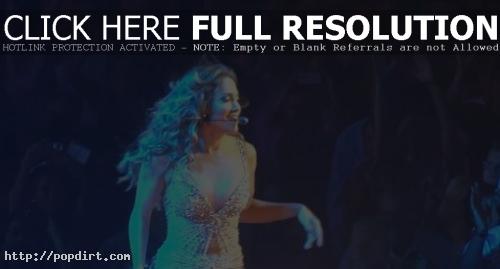 Jennifer Lopez phoned in to Chicago’s 103.5 Kiss FM the other day to talk with DJ Brotha Fred about her tour with Enrique Iglesias. Lopez shared how she and Enrique decided who would headline, what she calls her boyfriend Casper Smart, her decision to leave ‘American Idol’, Mariah Carey signing on to replace her, if she’d read the book ’50 Shades of Grey’ and that incident where Casper walked into a gay peep show on accident, intending to go into a barbershop next door. The Carey questions prompted some nervous J.Lo laughter given her strained relationship with the fellow singer and Carey’s 2001 meltdown.

On “fighting for stage time with Enrique”:

We were fighting at first because I wanted to open, and he wanted open. I wanted to be done early so i could go and get the babies to sleep early and stuff like that.

On her boyfriend’s name:

You know his name is Beau but people call him Casper.

Yeah, it’s pretty done. I mean I had a great time doing ‘Idol’ and I’m gonna miss it. I was flattered that they asked me back and wanted me back, and I was close to going back on many levels, but at the end of the day I just knew it was time to kind of get back to what I do, touring, doing music again, doing movies, and all that. When you do ‘Idol’ it really does put you on hold for a second.

On if Mariah Carey could keep sane for a whole season:

On Brotha Fred’s desire to have J.Lo say Mariah’s crazy:

(Laughs) That’s not my place to say anything. I just always wish everybody the best.

On Casper going into a gay peep show on accident:

He was looking for a barbershop and walked in the wrong door and caused this whole thing, but I’m not even gonna put any energy into it. We know who we are.

Listen to the interview via 1035kissfm.com below.