Paris Bennett Playing The Vote For The Worst Game

April 14, 2007 – ‘American Idol’ season five finalist Paris Bennett phoned into the Tone E Fly Morning Show in Minneapolis on Friday (April 13), calling ‘Idol’ “a joke” and saying she and a few other contestants are using the website VotefortheWorst.com to screw with the results to benefit Sanjaya Malakar. “We want to see him [Sanjaya] win because it’ll kind of prove that ‘American Idol’ is kind of losing its taste,” Bennett explained, “it kinda isn’t going for talent anymore and more for popularity.” Listen to the interview at TMZ.

April 13, 2007 – Where do all those ‘American Idol’ votes really come from, including 35 million cast this week, and why does the system seem to be shrouded in secrecy? “As a democratic society, we think that anything involving voting is going to be incredibly fair,” said ‘Good Morning America’ technology contributor Becky Worley. “With technology today there are lots of ways to subvert the system.” Read more and watch a report, aired Thursday (April 12), at abc.go.com.

April 13, 2007 – ‘Extra’ correspondent Terri Seymour was at ‘American Idol’ last night and got the scoop on Jennifer Lopez’s love for the hit show. “I love it! I get caught up in it, I get caught up in the drama,” she admitted. As for Jennifer’s true feelings about Sanjaya, the singer said, “He was very good, he was very good. He sang very beautifully.” Read more. 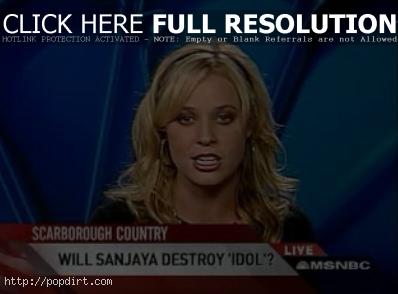 April 13, 2007 – Sanjaya Malakar survived another round of ‘American Idol’. ‘Scarborough Country’ host Joe Scarborough asked former ‘Idol’ contestant Carmen Rasmusen and former child star Danny Bonaduce whether Sanjaya really has any chance of becoming the next ‘American Idol’. Video of the segment, aired Thursday (April 12), at Bing.com has since been removed.

April 12, 2007 – Jennifer’s rep is strongly denying a story by OK! magazine suggesting the diva and her hubby Marc Anthony have “called it quits”. Lopez’s rep Leslie Sloane tells Usmagazine.com that the report is “a disgusting story full of lies. We’re consulting lawyers.” The full story at usmagazine.com has since been removed.