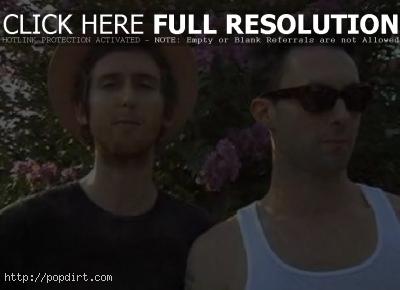 Jesse Carmichael of Maroon 5 checked in with fans on the group’s MySpace TV channel, discussing the web site votesolar.org, a group Jesse’s sister works for. Singer Adam Levine was going to be in the clip too, but Jesse said because there were bees hovering where it was recorded, he got scared and ran. While explaining the group’s efforts to get an alternative energy bill currently stuck in congress approved, Levine momentarily returned, only to run off again after encountering more bees.

“We’re out here in Raleigh, and it’s a beautiful day in the sunshine,” Jesse said. “We’ve got some things to talk about with you guys, solar power. We wanted to talk to you guys, our fans, or friends, about VoteSolar.org, which is a company that my sister works for. They’re working on something very important right now, here’s what it is: There is a law going through congress right now, waiting to be passed, that would give alternative energy, things like wind power and solar power, tax incentives so they can continue to do what they have to do, so that solar power and wind power and other forms of alternative energy can really take hold in this country, and we can start making some forward progress on making energy in a sustainable way. So we need your help because this bill has not passed and it’s been in congress for a year and at every vote, they’ve reached a stand still. I don’t know why, there’s lobbying coming from other places, but whatever it is they need support from people like you, who can go to this web site, click on the take action button, then fill in your name for email that will go to your senators or get a phone number for your local senators and we can get some pressure on them to get this law passed.”

One thought on “Jesse Carmichael Of Maroon 5 Discusses VoteSolar.org”