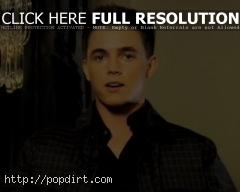 Jesse McCartney gave MySpace Celebrity an exclusive look at the making of his new music video ‘It’s Over’, the second release off the pop singer’s third studio album ‘Departure’.

The video will premiere on November 18th at MySpace. Jesse says the song “is really heartfelt. It talks about the reality of a relationship coming to an end. Not necessarily for the good or the bad, just the reality of it all. I think it’s something everyone goes through, accessible to all the fans, certainly those my age or any age really. I think it hits home for a lot of people and it’s one of my favorite songs from the record so I’m really excited about this one.”

The behind the scenes footage at MySpace has since been removed.