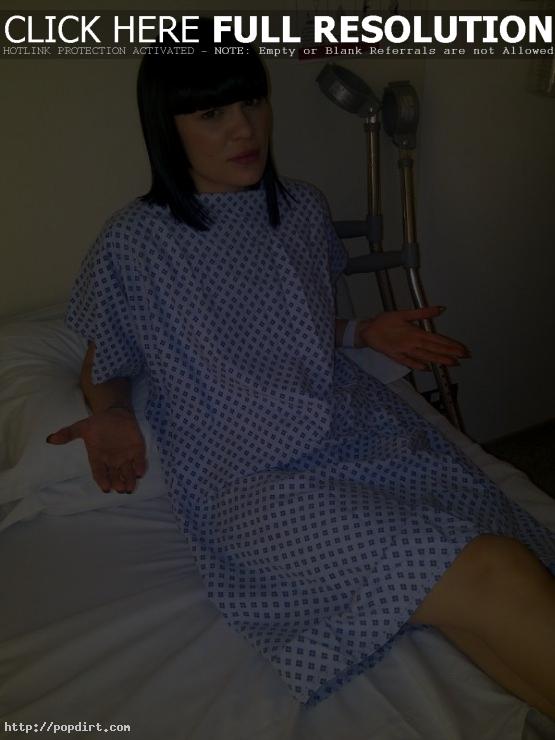 “Sorry doesn’t feel enough to say, I am devastated for my fans that I know have been waiting to see me and working hard for tickets,” Jessie J told her fans in a statement posted at her official web site. “I was so excited about the summer and I’m as upset as you all are. But unfortunately these things happen. I have to remain positive and I promise I will make it up later in the year.”

Among Jessie’s Twitter messages (@jessiejofficial) about the foot injury, beginning June 22nd, which included a show at Glastonbury in between the diagnosis and the surgery about 12 hours ago:

I am back in the UK. I didn’t tweet all day yesterday as I was at the hospital having scans on my foot! To get a specific diagnosis…

Turns out Ive been hobbling around with a broken foot :| So will be in a hench grey darfaydar looking boot and on crutches for 6 weeks (cool lol) #mashup

I said to a friend the other day. “The ones that love you when you are broken are the ones who will love you always….” #nobodysperfect

Trying to do anything with a broken foot is long.com

Just left #glasto what an amazing show!!! So many people came out to watch!!! Loved it! I promised id bring some sun with me ;)

Apologies to any #heartbeats who were supposed to see me perform outside of the UK in the next few months. I’m not allowed to fly and I’m so :( I cant come #oneday x

I will be having surgery next week as the break is real bad.I want my #heartbeats to know that I want to do every show,festival,gig but it will all depend on how I am.I am going to be on crutches for way longer than 6 weeks :( #positivethinking I’m gonna do the best I can to #notletyoudown

Okay so I’m signing out for today. Going in for my surgery now. Super scared! Tweet you on the other side #positivethinking

Keep making nervous jokes with the doctor and he keeps looking at me blankly. Which is making me laugh even more…. #AWKWARD

Can’t keep tweeting. Still very dizzy and being sick. But I’m okay I got through it. Thanks for all your message. Means a lot x

I am in tears. I never thought it would come to this. Next year I will be at all the festivals but for now I have to follow doctors orders and just look after me. I know my #heartbeats will understand… #imsorry

For those asking about my foot. You know when you wake up with #fuzzyglovehand lol. It’s like that on my foot X100 #fuzzyglovefoot