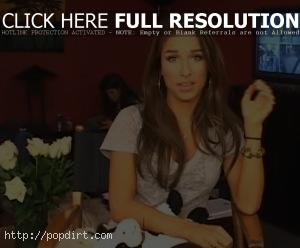 Jessie James is on the MTV show ‘Silent Library’, airing February 1st. Scenes at MTV.com from the upcoming episode feature Jessie and others eating gag-worthy items out of the vending machines and Jessie consoling a contestant who was unable to stay silent with a contraption twisting against her hair.

“The thing that I was surprised with the most was all of the disgusting food that we had to eat out of the vending machines,” Jessie said afterward. “There was a tooth paste cracker thing, and somebody had to eat mayonnaise filled Twinkies. That was disgusting, and everyone was throwing up. I didn’t even try to eat mine.”

Watch both clips below.