Quick dissertation on the anatomy of “hate” in our decade: web sites get paid by advertisers based on how many site visits they get…

…how do you get as many clicks as possible? Shock them into clicking. Caps, exclamation points, anything hyper-sensitive.

then, keep them coming back by way of letting them comment. Someone who posts will check the site for replies: more clicks, more money.

Also, ask them their opinion and let them “vote.” That always works. Why? Click on a poll, get transported to another page. Another click!

This would be just fine if it weren’t for the hordes of people who don’t get the fact that it’s all dollar-generated.

True hate’s not really happening… I promise you. Consider it “The Hate-rix.” 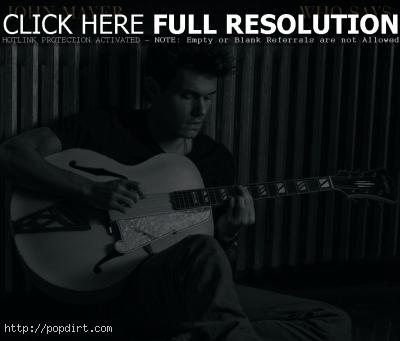 October 14, 2009 – John Mayer is out with the music video to his new single ‘Who Says’, the lead release from the American singer songwriter’s fourth studio album ‘Battle Studies’, released November 17th via Columbia Records. Watch the Anthony Mandler directed video below.

Reminder From John Mayer: The War Is Still Happening

September 8, 2009 – John Mayer checked in with his Twitter followers (@johncmayer) on Tuesday (September 8), talking about a communication he had with a friend in the military, presumably in Afghanistan, and how the media hasn’t devoted much attention to the war. The singer songwriter tells readers:

A friend of mine who is a Marine captain texted me last night after an IED went off at his base. Marines were killed…

Just want to remind you the war is still happening. That is all.

He wrote “Nobody cares, I took down a heroin processing plant 2 days ago, nothing! I hear more about you on the news” – now you know.