John Mayer Appears On The CBS ‘The Early Show’ 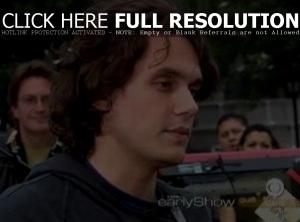 John Mayer is on a nationwide tour to promote his new album, ‘Continuum’. He talked with Hannah Storm on ‘The Early Show’ plaza the other day about being in a good place, the message behind the new album and the hit single ‘Waiting on the World to Change’. He also performed.

On things being as perfect as they can be for him right now, Mayer said, “For now, yeah. Everything builds as an artist up until now and hopefully including the next couple of years at least.”

On what he wants to convey on ‘Continuum’, Mayer stated, “That as you start to get into your late 20s you realize that nobody you looked up to never knew what they were doing either. That’s kind of an interesting freedom in that. So try your best, it’s your right to try, and it’s a whole record about time passing and how you make peace with it.”

On the message behind ‘Waiting on the World to Change’, he said, “It’s about a feeling in my generation and why there’s a silence right now. Is silence a sanity protective measure or is it apathy, and I think it’s probably a protective measure. You only get one heart and once it’s jaded, you never unjade it, so I think we’re waiting for the right time to step in.”

Watch the interview via CBSNews.com below the cut.

September 24, 2006 – John Mayer announced on his official web site’s blog on Saturday (September 23) that Simon & Schuster is set to publish his debut novel, ‘The Pioneer’, in time for Christmas.

September 18, 2006 – Top searches for John Mayer in the month of August on Yahoo’s pay-per search engine Overture.com are in, with the singer/songwriter receiving 335,240 queries for “John Mayer”. His most searched for song was ‘Daughter’ with 2,106 queries, followed by ‘Waiting On The World To Change’ with 1,771. Other queries included info on his summer tour with Sheryl Crow and his now released album ‘Continuum’. The most common misspelling was “John Mayor” with 10,472 searches.