March 13, 2003 – Rolling Stone magazine did a Q&A with John Mayer and asked him who is the hottest female rocker. “Oh, my God, Gwen Stefani,” he said. “I was late on the SS Stefani. I didn’t make it to the dock in time. But now I’m on it big-time.” Reminded that he was still too late now that the No Doubt singer has married Gavin Rossdale of Bush, Mayer replied, “That’s OK. I’m on it. She’s the perfect combination of bulldog and daisy. Absolutely amazing. She has a sweetness to her that never leaves, even when she’s crawling around the stage like a spider. I don’t even mean it in a “Boy, would I want to bang Gwen Stefani” way. But I sure would want to grab her ass.”

Mariah Carey To Be Guest Judge On American Idol

March 12, 2003 – Contributed by NJHottie24: Today on 102.7 KIIS FM (Los Angeles), Ryan Seacrest was a guest host filling in for Rick Dees. Simon Cowell was a special guest and was asked about rumors that Mariah Carey would be appearing on ‘American Idol’ as a celebrity guest judge, on an episode where the remaining contestants would be performing Mariah songs. Simon confirmed that they were in talks with Mariah and that “It’s probably going to happen in the next few weeks.”

March 12, 2003 – The Sun reports George Clooney has blasted ‘American Idol’ judge Simon Cowell, suggesting his nasty behavior towards the contestants is due to an ulterior motive. Clooney said, “Cowell is not helping them. He is doing it to show how interesting he can be. All he is trying to do is get laid. He is quite open about it and I am like. “Is that your best way of getting laid?'”

March 11, 2003 – Simon Cowell told Jay Leno last night that *NSYNC star Justin Timberlake could be a pretty good star, while Jennifer Lopez wouldn’t even be invited back to Hollywood and Limp Bizkit singer Fred Durst is ugly (fellow American Idol judges Paula Abdul and Randy Jackson agreed). Then Jay asked them if they like Britney Spears and Simon said she is good and would take her out for dinner. Paula said America loves her and she will always make it. Randy said she would be in the top 10 and she is really good. Simon added that she was sexy and would take her out for dinner. When they showed a Fred Durst photo Simon just said ‘Ugly!’

March 10, 2003 – The Sunday People reports that American Idol judge poor Simon Cowell admits his dating performance has left him reflecting on his chances of ever finding a long term partner. “Women are smarter and better at the dating game, we men are just pathetic,” he says. “Within hours of meeting a girl they’re talking about marriage and kids. I’m cynical about something lasting for along time without both people getting bored.”

March 3, 2003 – HitsDailyDouble.com caught up with John Mayer and got his take on things following the Grammys where Norah Jones beat him out — and everyone else for that matter. As for what’s up on his next album? “I’m doing it all at my house right now; I’m just demoing,” he said. “Ya know, technology is an amazing thing, because technology has now equalized every single person in the sense of giving them an equal chance at making it. If you have $2,000, you can make a record, too. And that’s great, because it’s gonna come down to talent.” 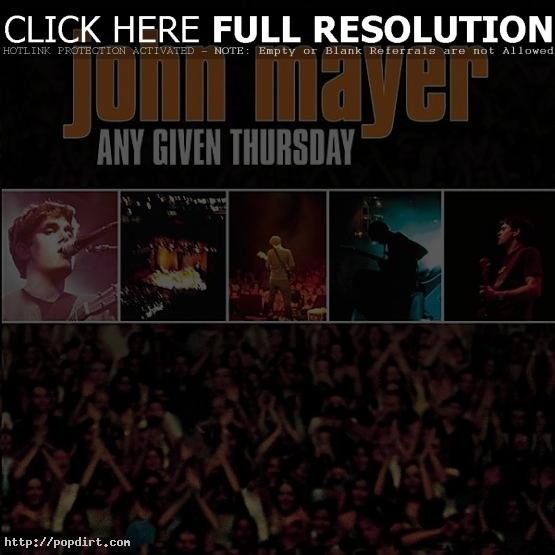 March 1, 2003 – Tim Sullivan of the Georgetown Hoya reviewed John Mayer’s new live two-disc CD ‘Any Given Thursday.’ He says the album “contains little more than live versions of most of the songs from his major-label release Room for Squares. Unless you’re one of those people who must buy every single recording by your favorite artists, save your money for tickets to the John Mayer/Counting Crows tour this summer.”