John Mayer ‘Stitched Up’ In The Studio 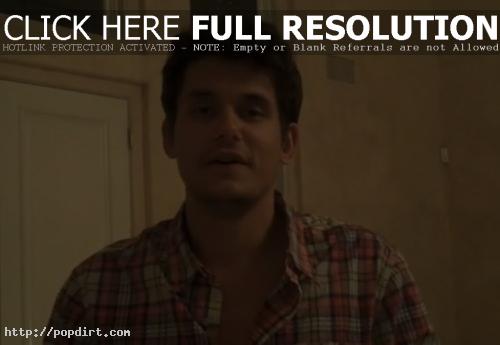 John Mayer posted footage from the studio where he and Steve Jordan got back into the groove. “This is the guitar I wrote the ‘Stitched Up’ groove on,” Mayer says. “I’m playing a Novax 8 string guitar (bass and guitar on the same instrument) through a Fulltone Tremolo, Way Huge Aquapuss and into a Dumble Overdrive Reverb. Alessandro 2×12 Celestion gold speaker cab.” Watch it below.

April 10, 2009 – John Mayer gave stand-up comedy a shot on his Mayercraft Cruise, even if it is at the expense of TMZ’s Harvey Levin.

“They said I wanted $10 million for a book deal,” Mayer said durig his standup, “to write about my last relationship. You know how I know that’s wrong? I would do it for way less!”

Watch TMZ report on the humor, and Harvey’s reaction to John’s diss, via MySpace below.

April 9, 2009 – John Mayer mused on Twitter (@johncmayer) about the possibility that tabloids would focus on his relationship with the guitar rather than the his dating life earlier today – prompting OK! to grant the singer songwriter’s wish (while clarifying they’re “a celebrity weekly and by no means a tabloid”). Mayer writes:

It would be fun, just once, to catch the cover of a weekly tabloid and see the headline “John Mayer Nails Solo to ‘Wheel!'”

Credit where it’s due: this is hilarious.

John Mayer Says Thank The Troops At The Airport

April 8, 2009 – John Mayer offered support for the troops in his latest Twitter postings (@johncmayer) minutes ago. The singer songwriter says:

Regardless of how the nation is split on the decision to go to war, we have to come together to thank and respect our returning warriors.

The next time you’re at the airport and you see a man or woman in fatigues, go up and say thank you. They’ll appreciate it, I promise.