John Mayer ‘Waiting On The World To Change’ Live Video 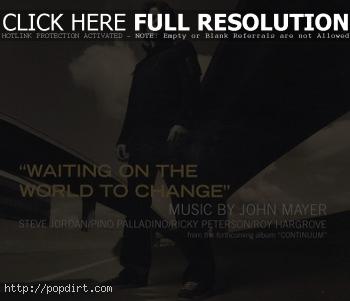 John Mayer is set to release his live DVD ‘Where The Light Is: John Mayer Live In Los Angeles’ on July 1st on Sony BMG. Watch a performance of ‘Waiting On The World To Change’ from the disc at YouTube.

May 12, 2008 – John Mayer and new girlfriend Jennifer Aniston were spotted relaxing at the Mandarin Oriental Hotel in Miami on Saturday. The pair were spotted poolside at the hotel, kissing and eating salad. People.com has details and a couple pictures.

‘John Mayer: Where The Light Is’ Trailer

May 10, 2008 – John Mayer posted the trailer for his upcoming multi-format live concert recording ‘John Mayer: Where The Light Is’, available July 1st.