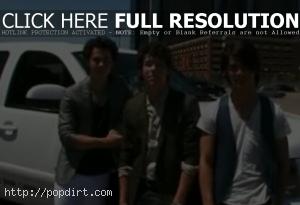 At every stop along the Burning Up Tour, Chevy is giving concertgoers a chance to meet the Jonas Brothers before the concert.

“We’ve joined forces with Chevy because they care as much about the environment as we do,” Kevin Jonas says in a promo clip.

Fans are asked to bring signs to the sibling pop trio’s concerts with a poster that includes the Jonas Brothers name, Chevy’s logo, and what gas friendly to gas free means to you. Those selected get VIP tickets to the show and a chance to hang out with the Nick, Kevin and Joe before they hit the stage.

Watch the promo clip below.

Popstar magazine posted footage of the Jonas Brothers performing in Sacramento on July 16th at Hard Rock Cafe during an acoustic Radio Disney gig. At the event, Sacramento’s Mayor Heather Fargo declared the day to be ‘Jonas Brothers Day’ in California’s capital. They also got a look inside the sibling trio’s tour bus, which features a built in recording studio. The brothers were later seen rehearsing for their concert with Demi Lovato at the Sleeptrain Ampitheatre. The clip ends with Lovato performing followed by the Jonas Brothers. Watch it below.