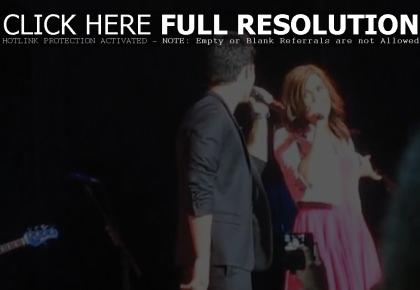 Jonas Brothers and Demi Lovato performed at the premiere of ‘Camp Rock 2: The Final Jam’ following the movie’s screening at Lincoln Center’s Alice Tully Hall on Wednesday night (August 18). The set included the sibling pop trio performing ‘Heart and Soul’, ‘Lovebug’, ‘This Is Our Song’, ‘Play My Music’, while Demi performed ‘It’s On’ and joined ex-boyfriend Joe Jonas in a duet of ‘Wouldn’t Change a Thing’.

On the red carpet, Demi talked about working with her ex. “We’ve obviously had our ups and downs, but no matter what, we’ll be best friends for a long time,” she said.