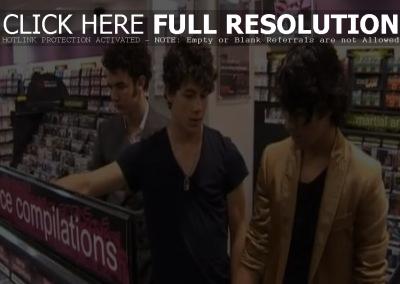 The Jonas Brothers bumped into Her Majesty The Queen buying their UK debut album at an HMV in London and it was all a bit awkward for the sibling pop trio, who thought they were in the clear after sneaking away.

The faux queen warned them, “It’s all a bit suspicious. If you’re following me, I can make you disappear you know. Just like that. Do you think I’m joking? I only came in here to buy your CD which came out today and I didn’t expect to see you here.”

Variety reports that the premiere of the Jonas Brothers starring Disney telepic ‘Camp Rock’ scored big ratings for Disney Channel on Friday night. The 8.9 million viewers who tuned in to the program’s debut made ‘Camp Rock’ the most watched cable entertainment program of 2008. Still, the audience was about half the 17.3 million who viewed ‘High School Musical 2’ last August on Disney Channel.