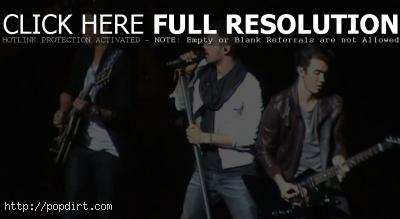 The Jonas Brothers announced that they will be reuniting for one concert at Radio City Music Hall. Kevin Jonas, joined by his wife Danielle, and later by Nick and Joe, chatted with ‘On Air with Ryan Seacrest’ about the concert, Kevin and Danielle’s reality show ‘Married To Jonas’, Kevin not liking bananas, Aly Raisman, Nick being a possible ‘American Idol’ judge, a new Jonas Brothers album and more.

On deciding to let cameras inside their relationship, Kevin said:

When we got the call and we were talking a little bit, even with you as well, we kind of opened ourselves up to it. We had the thought basically we had to consider something like this greatly. We can’t just jump into it saying, ‘Yeah, it’ll be fun.’ You really need to get in there and say alright, cool, I’m gonna be open and I’ve got to learn how to be honest, at the same time be human as well. Not putting it on for the camera. Then we started having fun. We did the pilot and we really enjoyed it. One thing that really blew us away was how much we learned about each other. The cameras were like a therapist in the room, always. It’s kind of like you have to know you’re gonna see this, and you’re gonna have to talk about everything that you’re doing. What some in relationships or in marriages sweep under the rug, you kind of pick your battles. With this, every battle is being picked.

On forgetting the cameras were there eventually, Kevin said:

A month in, or even a week in, we’re in moments we’re just like okay, I did not even know the cameras were there at a certain point. Me and Danni are just going at it, or something like that. Then you turn around and go, ‘Oh, hello 14 people in my bedroom.’

On Kevin’s family being more laid back, he said:

They are. They’re kind of chill. They’re kind of to themselves because we had to be busy for so long. They are to a point though, because when you get them behind the usual closed doors, they really open up and they’re very opinionated and fun and things like that. Of course you know Joe and Nick, but you get to see them in a new way on the show which is really cool too. Behind the scenes, not in the studio every time.

Everyone thought I was allergic to them because I got really sick whenever I had one when I was younger. You know when you have something and you eat that really makes you sick, then you never want to touch it again, it’s carried out for the rest of my life. I eat a lot of fruit, so it’s weird.

On the new Jonas Brothers album and if he’ll be having more solos:

Definitely working on it. Definitely trying. We’re in the studio right now and we’re making another record. There should be a lot of new and fun and exciting things coming.

We know it’s time to come back and do another album. So much is going on. We’re each doing things. I actually got chills when you said that. It’s time. We need to be back on the road together. We’ve been making some really good music that we feel we’re ready to play and we just can’t wait to see the fans.

On what to expect from the concert, Nick, who came on mid-interview via the phone, said:

I think the main thing to expect from this show is a show that’s all about the music. We want the production of the show, the bells and whistles, to really be in the music and being creative with how we can sort of remix all the music for the fans, but also introduce the new music in a new and creative way while still having a great light show, great stage set-up, everything. It’s gonna be a celebration for us to, to be back on stage together and kind of a party with our fans.

On whether fans can expect more shows, Joe, who also came on mid-interview via the phone, said:

I believe so. I mean for us we’re gonna try to be doing as many shows as we can. But right now this is our only show in the States that we’re playing for the whole year, so we really want to see people come out, come from all over the U.S.