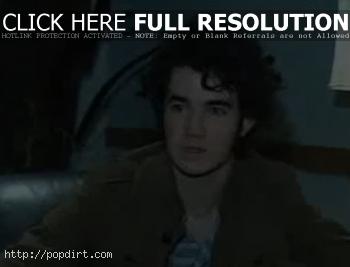 Footage of the Jonas Brothers performing ‘Year 3000’ above the Nokia Theater box office in the Dallas suburb Grand Prarie, Texas on Saturday (January 19) has been posted online. The band perform at the venue on February 28th, March 1st, and March 4th.

“To be able to come here to Texas and be able to surprise all of our fans was absolutely amazing,” Kevin said. “We were able to show up and see all of their awesome faces light up. It was extremely cold. We had some trouble playing the guitars out there because our hands were so cold, but the fact that they had been waiting since yesterday, waiting in line to get these tickets for us one of the most amazing things. We can never thank them enough for that.” 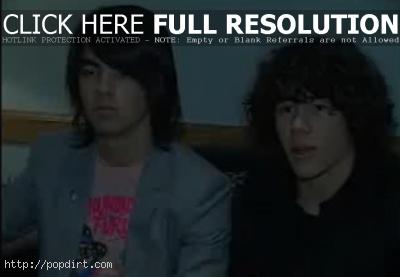 Talking about their new tour, Kevin said, “It’s very exciting that we’re able to come off of tour so quickly on the ‘Hannah Montana’ and Miley Cyrus tour, and be able to immediately go and do our own headlining tour.”

Nick added, “We wanted to be able to provide our fans the chance to get the first 20 rows at the venues, because we wanted the real fans to be right up front. We felt that having the first 20 rows being only sold at the box office was a great way to do it. On the ‘Hannah Montana’ tour there was a lot of problems with scalpers and things like that, where it was more about people who had to pay a lot of money for the tickets, where here it’s going to be the true fans that are going to be in tune with us on stage and we’ll feel the energy right there. It’s gonna be a great tour. We’re excited.”

Watch it and another clip posted by the Jonas Brothers documenting the surprise appearance below.