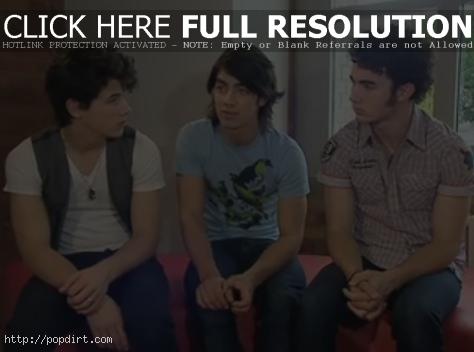 Star magazine reports that after Barack Obama was sworn in as the 44th president of the United States, his daughters Malia and Sasha spent their first night at the White House house with some friends from their new DC school, Sidwell Friends. While the kids got a tour of their new address, the girls opened a door and behind it were the Jonas Brothers. It was the second encounter the girls had this week with their favorite music group, having met the sibling pop trio on Monday night at the Kids’ Inaugural Concert.

Jonas Brothers Discuss ‘Kids’ Inaugural: We Are The Future’ Gig

‘Entertainment Tonight’ spoke with the Jonas Brothers about performing on Disney Channel’s ‘Kids’ Inaugural: We Are the Future’ concert over the weekend. “To perform for military families and children, we couldn’t ask to be part of a better thing,” Nick Jonas said. “We’re honored. We’re just excited to get out there and do it.”

“For us to be a part of history, it’s amazing. We are going to be able to tell our families and our future kids, and kids’ kids that we were there,” says Kevin Jonas. “We are just really, really excited and we are honored that we were asked to play.”

Joe Jonas said that Barack Obama’s two girls, who are big fans of the sibling pop trio, can expect a shout-out from them during the show. “We got to meet [Sasha and Malia Obama] at the ‘Ellen’ show and that was really exciting for us,” Joe said. “We are really looking forward to seeing them again.” The video at etonline.com has since been removed.

«Britney Spears Snapper Allegedly Roughed Up By Hotel Security
Did Britney Spears Behave Like A Demanding Diva At Peninsula Hotel?»