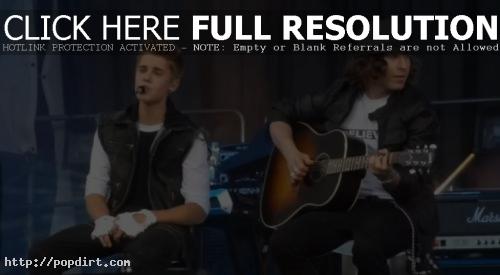 Justin Bieber was recently in Seattle for a concert and backstage, he spoke with Jackie & Bender of 106.1 KISS FM. The Canadian pop singer discussed some of his favorite things with a young fan who happened to be Bender’s daughter, what ‘One Less Lonely Girl’ is about and his favorite Christmas present. Then Bender spoke with Bieber, playing a clip from his last visit to their studio three years ago and how so much has changed for him.

On how life has changed in three years, he said, “It’s crazy how far it’s come since then, and it’s such a blessing. I never thought that it could get to this level of crazy. Now that I’m on top, the only way you can go is down, so you have to work so much harder to just stay at the top, so that’s why I want to just keep working hard and stay humble and remember where I came from.”

Listen to the interview via kissfmseattle.com below.