Justin Bieber Discusses His Christmas Album ‘Under The Mistletoe’ 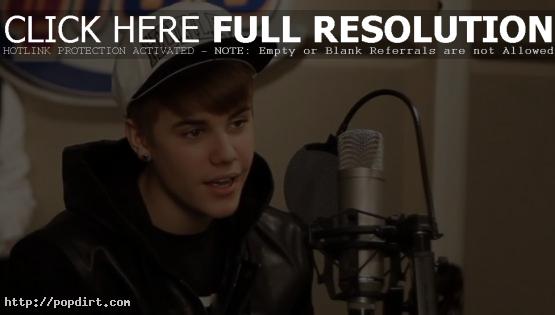 Justin Bieber hosted a Christmas radio special featuring songs from his holiday album ‘Under the Mistletoe’. The Canadian pop singer talked about what it was like recording his first Christmas LP, putting a Motown feel on ‘Santa Claus is Coming to Town’, how Christmas is more about spending time with family than gifts, changing things up on ‘Drummer Boy’ and his ‘All I Want for Christmas Is You (SuperFestive!)’ duet with Mariah Carey.

It was a lot of fun. I got to work with such great artists. Mariah Carey, Boyz II Men, The Band Perry, Busta Rhymes, so those were great. My favorite probably on the album was being able to work with my mentor, Usher. Just being in the studio and seeing him work was really, really inspiring.

Where they came up with the Motown feel to the song ‘Santa Claus is Coming to Town’:

I think ‘Santa Claus is Coming to Town’, the key changes and everything is very Jackson 5-esque, so basically that’s where I took it. I studied Michael when he was young and when he was old. The way he transitioned his career, so that was kind of the vibe I was going for, and people seem to like it.

What was his first Christmas memory:

Every Christmas is pretty much the same. I’m always with family. I’m always having a good time. It’s about family, it’s not about really the gifts. I remember getting gifts but it was never really about that. It’s about spending time with the people you love.

On resisting doing a standard version of ‘Drummer Boy’:

I was like, you know we should make it completely different. Like I’m the drummer boy. Me playing the stuff on ‘Drummer Boy’, like I’m playing the snare. I’m in the studio rocking out. It was really cool. The vibe in there and being able to change up the song was really great.