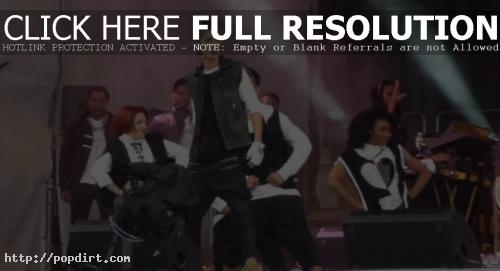 Justin Bieber chatted with Kochie and Mel recently during his special appearance on the ‘Sunrise’ morning show in Sydney, Australia. The Canadian pop singer talked about enjoying the crowd, the work he put into his new album ‘Believe’, putting inspiring messages into his music, looking up to Usher and the late Michael Jackson, family advice, Carly Rae Jepsen, being able to chill out, plans to tour Australia and more.

On messages in his music:

With my music, I always like to give inspiring messages, because I have a platform to do so much good and I feel like I have to use this. With my album, I named it ‘Believe’ just because there’s so many people that have struggles and might want to give up, and you should never give up. Never say never.

Usher’s very inspiring. I definitely look up to him as a mentor as well as Michael Jackson, someone who I look up to as well. His career and his talent, he’ll never been forgotten.

Words of wisdom he gets from the family:

Probably just to stay humble and stay grounded. Keep your family close and remember to always thank God for my blessings.

On taking Carly Rae Jepsen under his wing:

She had the number one song ‘Call Me Maybe’, so being able to help out others and give them that platform as Usher did for me is really special.

How he can chill out and be normal:

I think it’s about having good friends. No matter what we do, we’re friends and we have fun and we get to be in a basement doing nothing and having fun. It’s about who you surround yourself with.