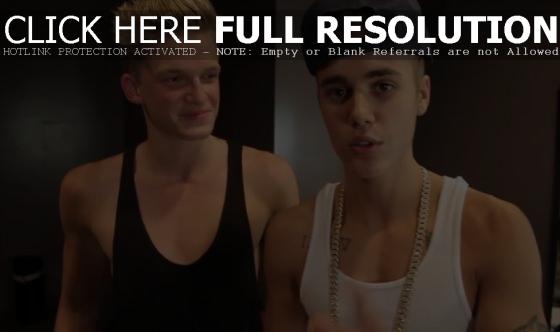 Earlier this month Justin Bieber joined Cody Simpson on stage while he was performing his new single ‘Pretty Brown Eyes’ at Club Nokia, surprising the mostly female, mostly screaming fans on June 14th. The Australian pop singer recently wrapped up a European tour with Bieber, joining select dates on the Canadian star’s ‘Believe’ Tour, and is currently on his own headlining tour in support of his upcoming sophomore album ‘Surfer’s Paradise’, out July 16th on Atlantic Records.

“So what’s up guys, I’m with my homie Cody Simpson,” Bieber said backstage afterward. “I used to call him my little bro, but now he’s kind of become my big bro, because he’s bigger than me. So I’ll see you guys soon. This is Cody Simpson, he’s doing great things, recording a lot of great songs, working hard in the dance studio, I can see you, and look out for his next album, it’s gonna be big.”