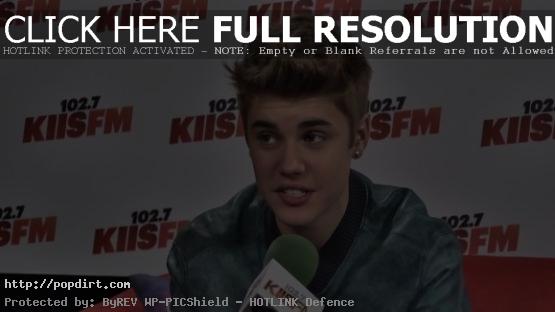 Justin Bieber spoke with KIIS FM’s JoJo Wright after he went on stage at Wango Tango 2012 recently. The Canadian pop singer talked about being able to kick off the annual concert, his single ‘Boyfriend’ and album ‘Believe’, not being able to share his Mother’s Day gift at the moment and his thoughts on Carly Rae Jepsen.

On his intro to the event:

On ‘Boyfriend’ and the album ‘Believe’:

Well ‘Boyfriend’ is just a dope record. I was really happy to put that out. It’s a little bit more mature and something that I think people can relate to. I think that my album in general I worked really hard on it. We just released a song called ‘Turn To You’, it’s actually for my mom for Mother’s Day, so that’s been blowing up. It’s like top 5 on iTunes now. It’s really fun. We’re just having fun with the album and I can’t wait for the world to hear it.

On his Mother’s Day gift:

I actually have a surprise for her. She’s not in LA so I can’t really say right now or I’m going to give it away. It’s really good. It’s a big gift.

She’s super talented and she has a great voice and she’s relatable, so I think she’s gonna be fine.