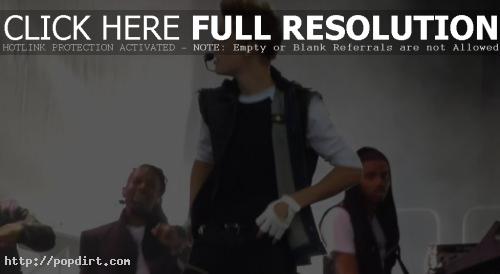 Justin Bieber has been receiving a mountain of criticism and sarcastic responses after his visit to the Anne Frank House on Friday in the Netherlands, where the Canadian pop singer said, “Truly inspiring to be able to come here. Anne was a great girl. Hopefully she would have been a Belieber.”

Abraham Foxman, who is the national director of the Anti-Defamation League, came to the defense of Bieber and explained he was told by a tour guide that Anne Frank was a fan of celebrities and pop culture before entering the house and had no issue with Bieber’s guestbook comments. “I don’t see anything wrong with it,” he said.

Among the comments on Twitter reacting to the headline:

Darth Vader (@DepressedDarth): If Anne Frank was a Belieber, I bet her diary would have been a lot less interesting.

Caprice Crane (@capricecrane): Justin Bieber thinks Anne Frank would have been a “Belieber.” Shame those annoying Nazis had to get in the way of that.

Jenny Johnson (@JennyJohnsonHi5): If Anne Frank wasn’t so preoccupied with documenting her experience of being hunted down by Nazis she would’ve totally been a Belieber.

Adam Hills (@adamhillscomedy): Justin Bieber hopes Anne Frank would have been a Belieber. Coincidentally, I’ve always hoped someone would lock him in an attic.

Adolf Hitler (@DictatorHitler): I saved Anne Frank from becoming a Belieber tho

Korey Kuhl (@koreykuhl): I always pictured Anne Frank as more of a Directioner than a Belieber.