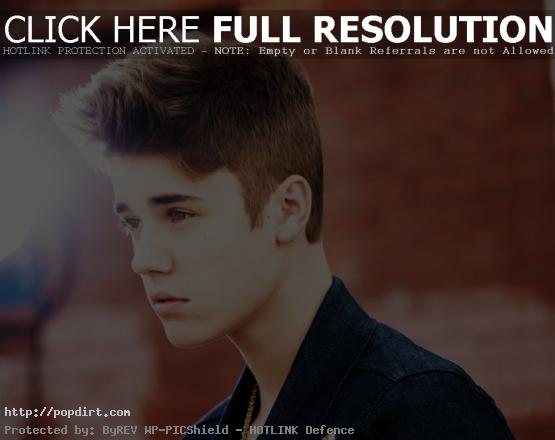 Justin Bieber visited with KIIS FM’s JoJo Wright earlier this month to promote his new album ‘Believe’. The Canadian pop singer talked about what it’s like to perform for 300,000 people, reading reviews on his music, experiencing a scary boat chase with fans, his habit of running into glass, stepping up his songwriting to prove he’s not a flash in the pan, the ‘Believe’ track ‘Maria’, tattoos and getting grilled by David Letterman.

On reading his reviews despite JoJo’s view that a lot of reviewers are “evil”:

A lot of people are evil, but they haven’t been too evil with this project, which is good. People said he’s maturing, a lot of people said I would never have listened to his music before, but now I catch myself listening to it in the car by myself, and it’s cool.

On the boat chase he was involved in with some crazy fans:

It was real. We had to do a escort with the boat because we were performing on the water. So after we got escorted, we had a police boat behind us and then all of the sudden literally hundreds of fan boats followed behind us. We were trying to have the police stop them, but they were going around the police and not caring and crashing into other boats. It was super dangerous and we had teenagers driving without life jackets. It was crazy stuff.

On running into a glass wall:

Songwriting to prove he’s not a product:

There’s a lot of teen acts that quickly have went down, so I just wanted to prove to everybody that this isn’t just a fluke that I’m here and I work hard and the music is gonna just show it.

On ‘Maria’ being his modern day version of ‘Billie Jean’ by Michael Jackson:

It’s just what happened. It’s something that I wanted to write about. My fans knew that something had happened and they didn’t get my side of the story, so I just wanted to talk about it.

I have tats on my legs and I have a tat on my side. It has to be what I want and wear I want at the specific moment. I can’t just go in and get a random tattoo.

On the David Letterman interview:

He was drilling me. He had me on my toes, that’s for sure, and he really messed up my tattoo. I literally got the tattoo the day before and he rubbed it. He’s rubbing on the tattoo and I was like, “Bro, are you kidding me? Are you really doing this right now?” I didn’t really believe it at the moment. This is really happening right now? I hope it’s not wrecked. It’s healing. It’s got a scab.