Justin Guarini At Little Tokyo With His Guard 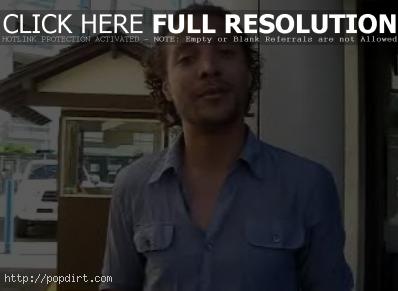 Justin Guarini checked in on his MySpace Video from the Japanese village in LA’s Little Tokyo district, joking about how he always has a guard with him.

“It’s difficult for me to travel around, so I always make sure that I have a guard posted in a small hutch at all times. As you can see, he’s working hard. He’s got his little radio in there. He’s looking out for me, that’s how we roll,” the ‘American Idol’ season one runner-up cracked.

Watch the clip via MySpace below.

January 16, 2009 – Justin is video blogging on Fancast the day after each episode of the show’s new season airs on FOX. The first video blog features Guarini talking about how the new ‘Idol’ judge Kara Dioguardi will change the show, as well as the trimming down audition airings and his thoughts on the first night’s contestants. The second blog has Guarini talking about the face time issue which contestants.

Both videos at fancast.com have since been removed.

February 18, 2008 – MSNBC’s Monica Novotny talked with ‘American Idol’ season one runner-up Justin Guarini about the hit FOX show picking its top 24 contestants for its seventh season. Guarini said he wasn’t surprised by the selections except for Josiah Leming being passed over. Guarini added that if he had to pick one favorite, it would be David Archuleta – “He’s just so talented, and I think he’s got a great future ahead of him.” Watch the segment below.