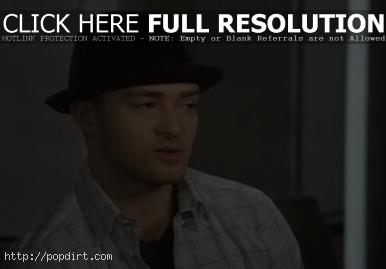 “I took some time off because I was burnt creatively,” Timberlake said about the long lag between his ‘Justified’ debut and his second album ‘FutureSex/LoveSounds’. “I know that my label definitely wanted me to put a record out right away, and I would have if I thought that it would have been as good as the last one, but I just thought that I was burnt creatively and I needed a break. So I found some other things to do, film, snowboarding, golf, and the time off was really good because it made me appreciate the beauty of creating again and it made me hungry again to do another record. With this one I feel like I’ve come up with the sound that’s unique and of the future.”

As for whether he was feeling pressure to top ‘Justified’, Justin said, “I think initially I felt the pressure of competing with the first record. The first record was just the first record. There was nothing to compare it to. There really was no pressure. I don’t think people expected what it got, which was good. I also think with this one, initially the pressure I felt started to subside a little bit after I started coming up with the music because I felt what I was creating was so unique, compared to that first album, that it kind of settled on its own plateau. Like I said before, it has a consistent sound to it, and I love it.

Asked about working with Timbaland on the project, Justin said, “I co-produced a lot of the record with Timbaland, and I worked a little bit with will.i.am and a little bit with Rick Rubin, but the stuff that I’ve done with Timbaland, a lot of that is gonna be primarily the album’s body of work. We have great chemistry in the studio. I just think we touched on it a little bit with ‘Cry Me A River’ on the first record and I think when we came back to do this record, we knew each other and we had that.. we’re two of the same kind of guys. We’re both from the south and I think we look at music the same way and I think we’re both looking to do something new. I think we both said to ourselves there’s no point in doing this unless we feel like we’ve created something new. We both took that approach at it, and it just became this thing where we would push each other to be better we were and it made a really great creative environment on this record with him.”

The interview video at Yahoo.com has since been removed.