Pictured below, Justin Timberlake of *NSYNC was spotted at a nightclub in Los Angeles on Friday night with whom Entertainment Tonight identified as a dancer who had appeared in one of *NSYNC’s videos. The couple is said to have partied all night and left together. Meanwhile, former girlfriend Britney Spears when asked at a press conference in London if she was in an intense relationship answered, “I wouldn’t say an intense relationship.” 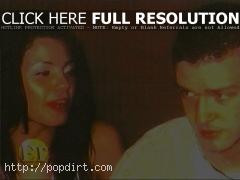 Will Smith Says Justin & Britney Should Work It Out

March 25, 2002 – CDNow.com reports Will Smith was asked on the red carpet of Sunday evening’s Oscars what he thought about the alleged breakup of Justin Timberlake of *NSYNC and Britney Spears. Will said, “They are a wonderful couple and they should work it out.” Will and wife Jada Pinkett Smith had to exit the Oscars early because one of their children had a high fever and ear infection.