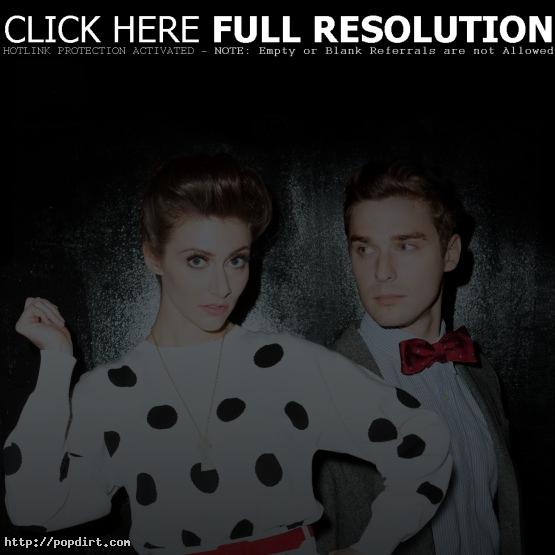 103.5 KTU in New York City caught up with Amy Heidemann and Nick Noonan recently, where the pop duo and engaged couple talked about their relationship, if what brought them together were looks or music and Amy’s trademark retro hairstyle.

On planning a wedding, Nick joked:

We get separate rooms now. We don’t talk. Separate buses. Separate trailers… It’s very cool, but at the same time it can be a lot of work, but overall it’s very positive.

On if they first met for music or looks:

Nick: She was kind of like the hot new singer on campus. I’d say she was the hot singer, but also a hot singer. I was a trombone player. I wasn’t really that cool. I was at the d-bag table. We knew each other from a distance. That was it. We played a few shows together and that was all. Beginning of our sophomore year, we actually started dating.
Amy: So we’ve been together longer as a couple than as a musical group. It will be seven years this September.

On the hairstyle, Amy said:

This one is called a suicide roll. Sometimes I don’t wear it, but it is my favorite hairstyle. It’s from the 1940’s. There’s a tutorial on YouTube if you want to learn, just type in Karmin hairstyle and you’re good.

Watch it via KTU.com below.