Karmin On UK Success, ‘Hello’ And Postponing Their Wedding 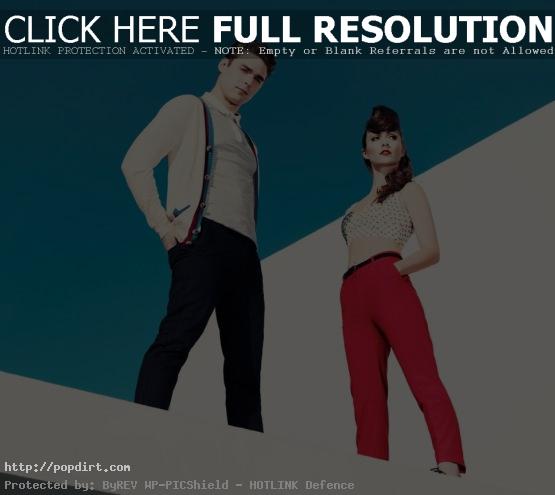 Amy Heidemann and Nick Noonan of Karmin have a unique chat with Chris K of The End 107.9 in Sacramento backstage after their performance at EndFest 2012. The duo talked about their ‘Good Morning America’ gig, having a brush with the Olympics during their London visit, how their music is being received in the UK, Amy having troubles with her hair at the airport, the story behind the single ‘Hello’ and having to postpone their wedding thanks largely to their music success.

On taking over the UK too:

Nick: That’s the plan. So far so good. They’re playing us a lot on the radio. It’s not even out until this coming week in the UK. So far so good.
Amy: We did a show and people were singing along, even to songs that aren’t.. I think the album drops in August, and they were singing and rapping along.

On Amy’s hairdo causing trouble at the airport:

I did go off at the airport. They had to pat me down.

On the single ‘Hello’:

Nick: ‘Hello’ is our story pretty much, kinda told from Amy’s perspective.
Amy: We shot a video for it last week, it’s awesome. All I can say is that I’m riding a bike through Chinatown, rapping. ‘Brokenhearted’ was great obviously, but this one really tells our story. It starts out in Nebraska where I’m from, the second verse takes you to Boston where we met, and then it takes you to Hollywood which was this last year. It’s a very catchy number and there’s a lot of rapping.

On having to postpone the wedding:

We were gonna do 9-10-11, or September 10th of last year. They were numbers that were in order. That’s cool. It was literally ten days prior, and I didn’t even have a tux yet, and there were all these things coming. They asked us to play iheartradio music festival, there was shooting videos and doing all this and that. The scheduling and days just got less and less, so we wanted to do it the right way and really spend the right about of time and do it.