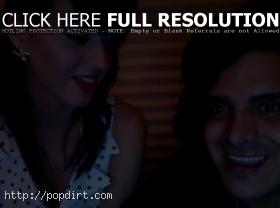 Katy Perry checked in with fans in a video clip at her MySpace after performing at the Warped Tour stop at Bicentennial Park in Miami on Saturday (July 12). Katy was joined by her Gym Class Heroes boyfriend Travis McCoy and her stylist pal Markus Molinari, and talked about the show and going to Miami hotspot Nobu.

“Hey everybody, we just had the best, best show in Miami,” Perry said. “I’ve been up since 12. We had fun. We played a good show in Miami, right?”