Katy Perry On The Set Of ‘Hot N Cold’ 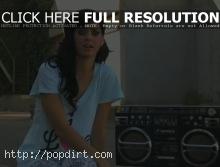 Katy Perry posted footage from the making of her new music video for ‘Hot N Cold’, the third release off Katy’s debut album ‘One Of The Boys’.

The clip stars her Santa Barbara buddy Alex Rodriguez as the groom, and her other friends star in the video too. Perry talked about her Bedazzled wedding dress in the clip, which she thought up with her longtime stylist. She hopes the dress will end up in a glass capsule, and Perry said she hopes to have a clothing line – which will take someone with a sense of humor to pull off. The clip ends with Katy showing off her basketball skills.